It has been almost twenty years since I addressed you from this place and opened the commemoration ceremony to pay tribute to all our victims of the Second World War with my speech for the first time. The topic of my introductory words is given by the character of this assembly and it happens that from time to time, I repeat some thoughts.

So please allow me to make a change. I will talk only about one thing closely related to that what happened during the holocaust. The topic is anti-Semitism. I will read a part of the introduction to the book of my brother, who in his short stories goes back to his youth and describes, how he experienced anti-semitism, shortly after the war.

We grew up as three brothers – sons of the Jewish parents. Our parents were lucky enough and strong enough to survive the holocaust. The most of the Jewish community here and elsewehere in Europe did not survive. The youngest of us, Andrej, who was born eight years after the war, didn’t know all those jokes and insults made because of his Jewish origin by his schoolmates and contemporaries. Growing up, he started to learn about his surroundings, the surroundings that could hurt sometimes. The sixties came and the anti-semitism supressed by the war had not been that strong and opened so far. I was born in 1949 and my experiences from my childhood, in that sense were definitely worse than those of my younger brother. Hidden, but also open forms of anti-semitism, although not always, accompanied me mainly in the elementary school till the middle of the sixties so to say. However, our brother Peter, born shortly after the war in 1947, had the worst experience from all of us. Even if it seems that the age difference was small enough to feel the anti-semitism the same way, the opposite was true. Our native town of Žilina used to be a city, where many different cultures mixed together before the Second World War. Not only Slovaks and Czechs lived in the symbiosis here, but also Hungarians, Germans and Jews, who constituted almost 17% of all inhabitants in the middle of the thirties. My father often told me about almost idyllic mutual coexistence of all nations and cultures in Žilina in this time. It took only a little and everything was changed from day to day. Anti-Jewish laws, loss of civil rights, detention camps and physical liquidation of almost 85% of the Slovak Jews. Idyll was over.

So much from the Introduction.

Yes, intolerance, inability and unwillingness to understand the others and accept that the other could be equal as well, were the reasons for what happened. The indescribable liquidation of the European Jewry by the Nazi Germany and its vassals was what happened. We gathered here today not only to remember our tortured, but also to make sure, that nothing like that will ever happen again.

I welcome you here in the commemoration hall of our cemetery, especially:

Pavel Frankl
Head of the Jewish religious community in Žilina 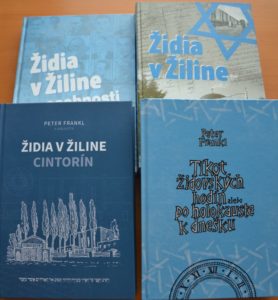