Domov » The meeting of the Žilina natives and the commemoration ceremony for the victims of the holocaust (June 2008).

As every year, also this year the Jewish religious community in Žilina has organized a meeting of all natives of Žilina whose lives were somehow connected with the existence of Jewry in Žilina. The meeting started in the afternoon, Saturday June 28, 2008, with the presentation of the book “Jews in Žilina” and with a short cultural program at the former orthodox synagogue on Dlabačová Street.

The part of the book, read aloud in front of the congregation, started a discussion with many interesting topics. The presence of the authors and coauthors of the book and their talks with the people taking part in this meeting, gave a feeling of participation in the creation of the book to all of the present.

“Also at this stage of writing of the book, we appreciate any information, which could help us to complete some chapters or to make some facts more accurate.” Said Mr.Peter Frankl on behalf of all authors.

As successful was the beginning of the meeting of the natives so pleasant was its continuation in the evening in the hotel Polom. As Mr.Pavel Frankl, the Head of the Jewish religious community in Žilina, said in his welcome speech, the meeting has been organized since 1996 and became very popular not only among the original natives, but also among their children and next generations. People from Israel, USA, Canada, Germany, Switzerland, Great Britain, and other countries come to this meeting to talk with their friends and relatives about the presence, but also about the past, about good, but also bad times in the life of Jews in Žilina. 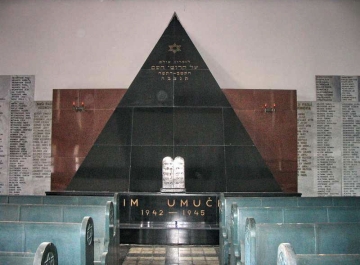 A remembrance meeting at the memorial of the holocaust victims was added to the commemoration ceremony in 2004. The memorial stands at the place of the former detention camp, from where more than 18.000 Jews were deported to concentration camps from April to October 1942. The Mayor of Žilina Mr.Ivan Harman addressed the participants of the meeting with his speech and the holocaust survivors or their relatives lit up the candles for all the victims. One candle was lit up by the daughter of those who saved Jews during the war.

The meeting, commemoration ceremony and remembrance meeting have become a firm part of the life of the Jewish religious community in Žilina and we are sure, that with a help of G-d we shall meet also the next year.